SALT LAKE CITY (Nov. 10, 2021) – The Utah School and Institutional Trust Lands Administration (SITLA) is proud to announce the winner of the 2021 Range Manager of the Year Award is one of their own.

Scott Chamberlain, a Southern Utah native, was given the award last week by the Utah Section of the Society for Range Management.

“Scott is the best of the best,” said Ron Torgerson, the Southeast Surface Resource Specialist for SITLA, who introduced the award recipient. “I don’t think anyone knows the land better than Scott. His knowledge and dedication to our forests and rangelands are really admirable,” Torgerson continued.

“I grew up in Southern Utah and can’t see myself living anywhere else,” said Chamberlain. “Utah land isn’t like any other place on earth, and because of that, it needs to be managed well. So for me, range management is my passion; it’s a way to make sure the land I grew up on stays the same or gets even better for the people that come after us.”

Chamberlain has a degree in Range Science from Utah State University. He spent a few summers working for the Forest Service and the Utah Division of Wildlife Resources but has spent the last 21 years working at SITLA. He has implemented hundreds of range improvement projects that have improved range conditions on thousands of acres of trust lands across the state.

In addition, Scott is considered an expert in strategic herbicide use to control cheatgrass on SITLA’s range reseeding projects. He administers hundreds of grazing permits for SITLA, 30 agricultural leases, and sells firewood and seed collecting permits each year.

“SITLA hires people who know the land they work on – period,” said Dave Ure, SITLA’s director. “These guys come to work here, and I’m proud to say they stay here for years. And it’s not because the job is easy. It’s one of the hardest jobs around. They work for SITLA because they love the land and want to see it maintained for decades to come.”

SITLA is also home to the 2020 Young Range Professional of the Year, Ethan Hallows. The award was bestowed on Hallows in 2020, but COVID-19 constraints did not allow for a gathering to present the award until now.

“Ethan is the cream of the crop,” said Ron Torgerson, the Southeast Surface Resource Specialist for SITLA, who introduced the award recipient. “As soon as he got out of college, he was thrown into the deep end and assigned a very heavy workload. I’m amazed at the leadership skills he has developed so quickly as a young professional,” Torgerson continued.

Ethan has a degree in Rangeland Ecology and Management from Utah State University and manages approximately one million acres of SITLA land in the state’s northern end. In addition, he brings experience from his work with the Snow College Natural Resources Department, the Utah Division of Wildlife Resources, and the U.S. Forest Service.

Hallows has made a significant impact in his short time with SITLA. He is well respected by his peers and customers. Hallows was nominated for the award by several individuals from other land management agencies from across the state.

“Ethan is one of the best fire rehabilitation specialists in the state,” stated Michelle McConkie, SITLA’s Surface Group Assistant Director. “He has taken the lead on our agency’s Watershed Restoration Initiative and worked hard to build relationships with Utah’s farmers and ranchers during the drought conditions wreaking havoc across the West. We’re proud to have him at SITLA.”

“I love what I do,” said Hallows. “I’ve always had a passion for the land and all of the things that take place on it. So I think I picked the perfect career path. I love working on the land and with the humble people that make a living off it. We work together to make sure it’s sustainable for future generations.” 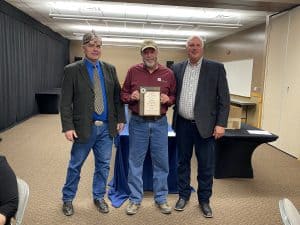 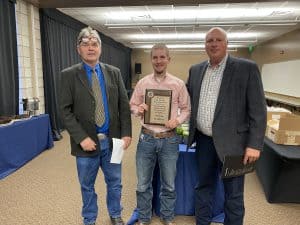 SITLA manages 3.4 million acres of trust lands in Utah. Trust lands, unlike public lands, are lands allocated by Congress specifically to generate revenue to support designated state institutions. The beneficiaries of trust land revenue include public schools, hospitals, teaching colleges, universities, and reservoirs. The Utah constitution mandates that SITLA manage the lands and revenues generated from them in the most profitable manner possible, and plan for the current beneficiaries and preserve trust assets for future beneficiaries.